Ramadan Day 21 – Arts & Entertainment: A God Too Small For Criticism

Posted on August 9, 2012 by bestcurrentnews 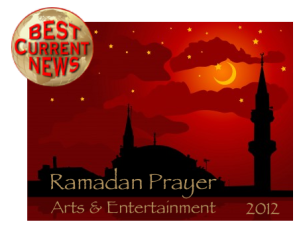 The modern day assault on the arts and entertainment field by Islamists began in 1989 with the issuance of a fatwa against novelist Salman Rushdie, by the Iranian leader Ayatollah Khomeini. A fatwa is a religious decree issued by a recognized religious authority in Islam. In the case of Salman Rushdie, the fatwa called for his death because of his novel, The Satanic Verses, which Khomeini considered an insult to Islam.  Khomeini declared, “I would like to inform all the intrepid Muslims in the world that the author of the book entitled ‘Satanic Verses’…as well as those publishers who were aware of its contents, are hereby sentenced to death. I call on all zealous Moslems to execute them quickly, wherever they find them, so that no one will dare to insult Islamic sanctity. Whoever is killed doing this will be regarded as a martyr and will go directly to heaven.”

Within 72 hours of Khomeini’s declaration, six people were killed and more than 160 were wounded in violent demonstrations in India and Pakistan about the book. Salman Rushdie went into hiding. Four days later he issued an apology to the followers of Islam, but Khomeini stated that even if Rushdie repented, Muslims still needed to kill him. Two bookshops carrying the novel were firebombed, and unexploded devices were found at several others. Rushdie again tried to make amends and issued a statement bearing witness that “there is no God but Allah, and Muhammad is his last prophet” to no avail. Even after Khomeini’s death, Iranian clerics continued to call for Rushdie’s death. The Japanese translator of the novel was stabbed to death in a knife attack, and Italian translator seriously injured in a similar attack. The Norwegian publisher of the novel was shot.

The tactics of the Islamists have not changed in the twenty plus years since the publication of The Satanic Verses. On September 30, 2005, Jyllands-Posten, a Danish newspaper, published an article called “Muhammeds ansight” which means “The face of Muhammad”. Portrayals of Muhammad are not prohibited within the Qur’an, however there are hadiths, which forbid Muslims from creating any visual representations of figures. The article consisted of 12 cartoons depicting the prophet Muhammad. Flemming Rose, the cultural editor of the newspaper said, “The cartoonists treated Islam the same way they treat Christianity, Buddhism, Hinduism and other religions. And by treating Muslims in Denmark as equals they made a point. We are integrating you into the Danish tradition of satire because you are part of our society, not strangers. The cartoons are including, rather than excluding, Muslims.” The Islamists however were not interested in the satirical portrayal of Muhammad and responded four months later with violence including the bombing of the Danish embassy in Pakistan, setting fire to the Danish Embassies in Syria, Lebanon, and Iran along with protests resulting in more than 100 deaths.

This type of behavior is not unfamiliar when western society meets Islam. Because of the threat of violence, far too often westerners simply practice self-censorship and refuse to treat Islam the same way they treat other religions. For instance Random House, because of the threat of a violent reaction refused to publish The Jewel of Medina, a novel about Aisha, Muhammad’s six-year-old wife. It is a historical fact that Muhammad married a six-year-old girl and consummated the marriage when she was nine, yet to state that fact could be considered slander if what you say offends a Muslim.

In Islam, it does not matter if what you say is true. Slander is defined as anything that offends a Muslim, and slander in Islam may be punishable by death.