The Qur’anic Justification for Terrorism

Posted on June 5, 2017 by bestcurrentnews 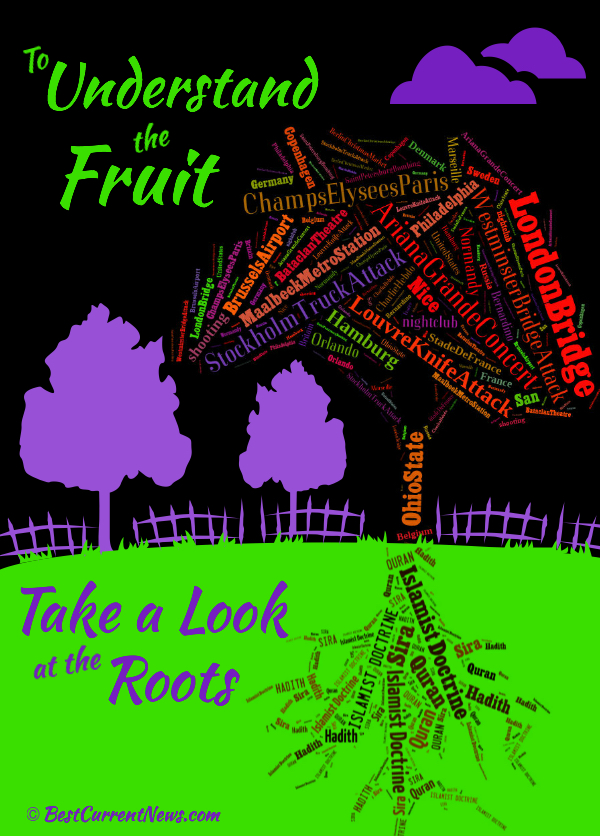 However, Islamists and terrorist groups are able to justify their actions based on their interpretation of the Qur’an and the example of Muhammad.

These are a few of the passages in the Qur’an that not only have been used in the past to support violence, but are being used today.  The RelgionofPeace.com reports that the Qur’an contains at least 109 verses that call Muslims to war with nonbelievers for the sake of Islamic rule. Answering Islam gives a list of some of the most prominent passages. Here are a few:

2:190-191 “Fight in the way of Allah those who fight you…And kill them wherever you overtake them. Fight them until there is no [more] fitnah and [until] worship is [acknoledged to be] for Allah.”

9:29 “Fight those who do not believe in Allah or in the Last Day and who do not consider unlawful what Allah and His Messenger have made unlawful and who do not adopt the religion of truth from those who were given the Scripture – [fight] until they give the jizyah (religious tax) willingly while they are humbled.”

Unlike the Old Testament of the Bible, which does contain passages that are violent, the Qur’anic passages are open-ended which means they can be applied to situations today whereas the Old Testament passages address a specific historical event. Further, Christians who commit acts of violence are betraying the teachings and example of Jesus.

The Qur’an of Islam supports violence against those who do not follow their religion. Based upon the teachings, the violent believe they are doing the service of Allah. However, Almighty God, through Jesus Christ, is a God of love, and He loves every human being and we were all created in His image.

Pray that Muslims will receive a revealtion of the Almighty God of love and be drawn to know the one who died for their sins, the Lord Jesus Christ.

← Is Islam a Religion or a Political System?
World Changers: Jesus & Muhammad →